Some pictures from Saturday's festivities. 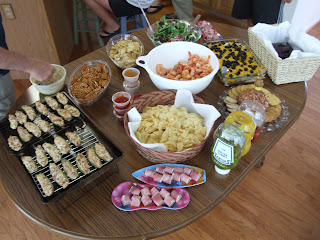 Part of the spread - yum! 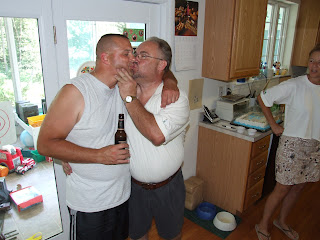 The birthday boy (on the left) getting a birthday kiss. 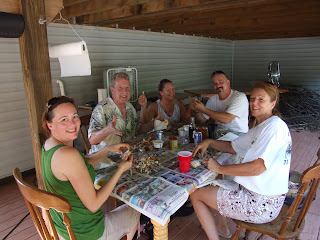 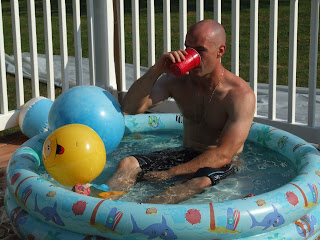 He completed a Rebel Race earlier in the day. He was pretty hot and tired! 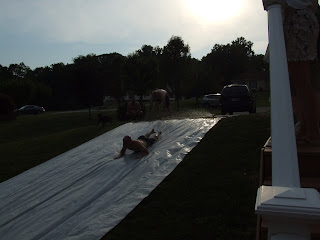 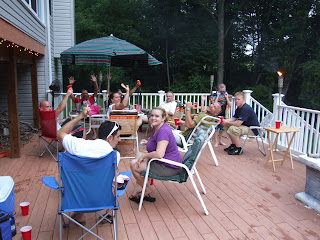 Everybody wave to the camera!
Posted by Bugaboo at 3:50 PM 1 comment: 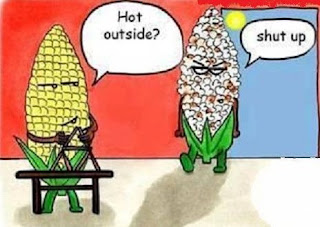 Most of the nation is facing a massive heat wave at the moment. Yes, it's wicked-crazy-hot. I'm currently playing with ideas as to how to proceed with our party tomorrow; they're predicting a high of 102F, which doesn't take into account the heat index. There is food to go bad, sun burns, heat exhaustion and gallons of sweat to work with. There's also the fact that I might just melt into a puddle after an hour in that beating sun.

The crabs will still be outside because, well, they're not really an indoor food. Luckily the crab table sits under our sunroom and will be shaded the entire time. There is always alcohol involved at our party, and it worries me what might happen to those who don't consume enough water to stay hydrated while indulging in the booze. The food will now go inside on our kitchen island and table. We generally turn off our AC altogether on party day because there are so many people going in and out of the house, plus we turn one of our speakers around in the living room window to allow music on the deck. It's simply not going to be an option tomorrow. We'll turn the AC up from the comfort level we normally keep it at, but we'll still have to keep it on. We won't survive otherwise. Plus, part of our crew will be coming from a funeral and will have already been out in the hot sun for awhile. We'll still have water in our kiddie pool and the slip 'n slide will be ready, but it's going to make for an interesting day. On the flip side, I'm thankful we're still able to host the party and we didn't lose power in this heat like thousands did. Very thankful!

Wish us luck, and to everyone else surviving this heat - stay as cool as you can!
Posted by Bugaboo at 3:53 PM No comments: 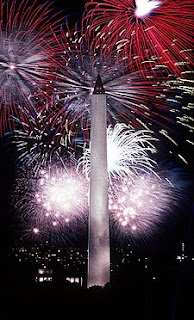 Wow, I haven't posted in a whole month. Shocker! But not reeeeeally. Happy birthday to America today - I'm at home, alone, gearing up for our annual summer party. Cleaning, prepping, shopping and making cold spinach dip for our potluck at work tomorrow. Here's a quick run through of what we're providing said party. A friend of ours has a lot of still-frozen hot dogs and hamburgers from a recent cookout, so they're providing those and picking up the buns for us, too. Such sweethearts. 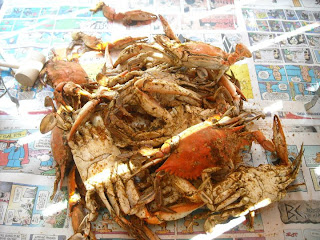 Everyone who comes is welcome to bring a dish but doesn't necessary have to, so we'll have an assortment of other goodies as well. I'll be first to acknowledge the unhealthiness of this menu, however I've tried to go the high road. Lots of veggies. Fruit salads. And you know what? No one wants to eat it and it gets thrown away the next morning during clean up. People apparently want to indulge at our party, so instead of throwing money down the drain yet again, I'll simply provide what they want. And now to get off this couch and clean several bathrooms. Let the fun begin!
Posted by Bugaboo at 5:00 PM No comments:

Well folks, it's been awhile since my last post. Today was my first day back from my vacation home to see my family in Wisconsin, and I'd like to get back on track. My plane ticket wasn't exactly cheap, but it sure was well worth it! Buppy and I have agreed to try to save money this month, meaning no extra eating out if possible. Tonight, for example, it couldn't be helped because Buppy had a Pack meeting with the kids, but I'd like to limit what we spend on ourselves. Bonus: healthier eating. Let's see if planning can help us achieve our goal. Here we go . . .

Monday - Dinner alone, which turned out to be toast topped with cheese and fried eggs.

Wednesday - Cod loin filets, likely baked with a little butter, lemon juice and dill. We'll have corn on the side.

Thursday - My usual night alone, and I'm thinking I'll make some seafood salad with the imitation crab meat I have in the fridge. It'll be tasty on a whole wheat English muffin or with crackers.

Friday - Another night alone due to another Pack meeting for Buppy and the kids. I have all the ingredients for breakfast burritos, which I love. Sounds good to me.

Saturday - Slow roasted brisket with a veggie-loaded garden salad on the side. My mom told me about a former coworker of hers who seasoned the brisket with onion soup mix before cooking, so I think I'll give that a try. It'll be my 3rd or 4th attempt at making a brisket (other than corned beef), and I'm hoping this time it's a winner.

Sunday - I'm not sure at this point if we'll be eating at my workplace or not. We have a huge party that night, and I'll be bartending and Buppy will be working as a manager. If we have to eat prior to leaving for the event, we'll throw something light together, like tuna salad sammies.

Alright. I have a plan. Now let's see if we can stick with it!
Posted by Bugaboo at 9:35 PM No comments: 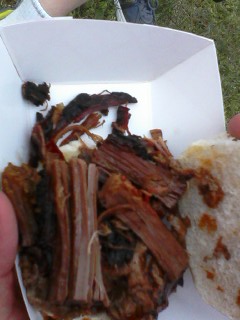 Yes, I realize that's an awful picture. I forgot my camera and had to resort to my cell phone. Boooo.

Buppy, the kids and I headed down to Naptown (Annapolis) yesterday afternoon for their annual barBAYq festival. Any festival known for it's food seems like a good idea to this gal! So . . . it was alright. It's a huge festival and is only $5 per adult at the entrance. Kids 10 and under are free, and they have tons of bouncy things the kids can play on for free - winner!

The food was alright. I mean the BBQ, like that pictured above, was pretty good stuff. But I had 2 issues with things in general:

1.) Of all the food vendors in attendance, only 5 or so were actually selling BBQ to the public. It was a competition, and there were quite a few competitors cooking. Sadly, the majority were there to simply compete, not sell to the public. A BBQ festival where one can only sample from such a small number of vendors was disappointing.

2.) Sampling. I really wish they'd offered 2 bite samples for $2, or something along those lines. I wanted to nibble on all sorts of BBQ, not be full after a sandwich because I couldn't purchase anything smaller. C'est va lie. 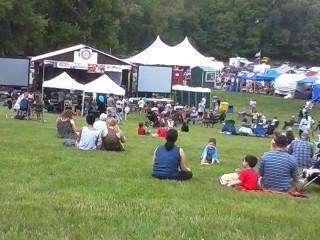 We spent several hours there and got some nice sun; it was a beautiful day to spend outside. When the kids weren't bouncing around, I sat on a hill, watched them run around and listened to several of the 32 bands that played throughout the day.

Overall, it was good time. I just needed more BBQ to sample and smaller, bite sized portions of it. Hopefully everyone else had a great weekend, too!
Posted by Bugaboo at 2:55 PM 2 comments: 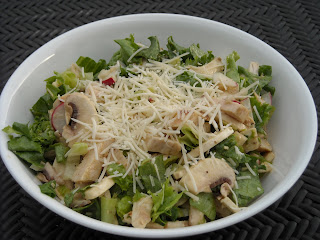 The other day I decided to try my hand at homemade Caesar salad dressing. It was the first time I'd ever purchased anchovies, too. Buppy was worried he'd taste them in the dressing, but I assured him he wouldn't. Secretly, I was panicked I'd taste them too, but he couldn't know that. He couldn't see me sweat. Nope. Not cool-handed Bugaboo. Luckily, the anchovies cannot be tasted and the dressing was a success. How could it not be when I used The Pioneer Woman's recipe? Thanks Ree - it's really tasty. I love that a little in a salad, if then tossed in a large bowl, goes a long way. Less calories consumed is a good thing, at least around here! Above, I tossed about 2 tablespoons with a salad composed of green leaf lettuce, radishes, mushrooms, grilled chicken and a sprinkle of Romano cheese. It was a light, healthy dinner.
Posted by Bugaboo at 8:00 AM No comments: 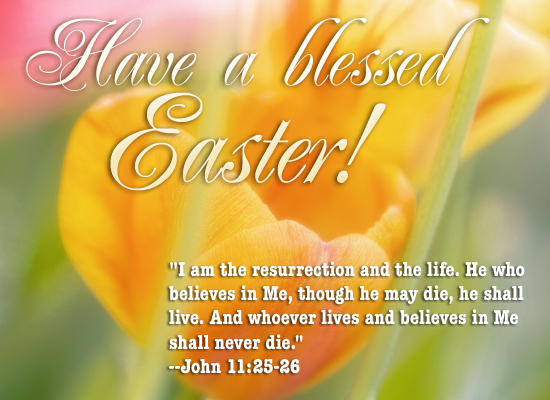 Photo Courtesy of SodaHead
Posted by Bugaboo at 1:05 PM No comments: